All About Vitamin D

Lately, vitamin D seems like the Paris Hilton of the nutrition world. It’s always in the news and you don’t really know why. So, instead of wondering, I figured I would investigate the swarm of research and news surrounding vitamin D.

Why is vitamin D so important?

Nearly every tissue and cell in our body has a vitamin D receptor. Without enough activated vitamin D in the body, dietary calcium cannot be absorbed. Calcium is essential for signaling between brain cells, development of bone, and tooth formation. Let’s be honest, nobody likes rickets.

Studies also reveal that low vitamin D levels in the body are associated with:

Alright, so we just spend more time in the sun or pop some supplements. Not so fast.

Despite the importance of vitamin D, it’s estimated that anywhere from 30% to 80% of the U.S. population is vitamin D deficient. It’s likely worse among people with darker skin living in northern zones, as their skin pigmentation screens out the relatively limited sunlight more effectively.

If your skin is darker, you are at higher risk of vitamin D deficiency. Consider spending more time at the beach. Get your doctor to write you a note — hey, that surfing trip is for medical reasons!

Vitamin D levels can also be affected by age and body fat levels. As we age, our ability to make vitamin D is reduced by 75%. Furthermore, vitamin D can get trapped in body fat, leading to a 55% reduction in blood levels for those who are over-fat.

What you should know about vitamin D

Vitamin D is a fat soluble vitamin that exists in various forms. The animal form is vitamin D3 (cholecalciferol) and the plant form is vitamin D2 (ergocalciferol). Vitamin D2 and D3 are not biologically active; they must be modified in the body to have any effect.

The active form of vitamin D is indeed a hormone and is known as 1,25-dihydroxyvitamin D3 [1,25(OH)2D3] or calcitriol. (Feel free to use that as a conversation starter the next time you’re picking up a hot date.) Both vitamin D2 and D3 have been commercially synthesized and both forms seem to be effective at maintaining blood levels of vitamin D in the body.

Vitamin D isn’t really a “true” vitamin, as we don’t need food to attain it. Natural sunlight allows our body to create vitamin D and even destroys excessive amounts. How does that happen?

Step #1: We convert cholesterol to 7-dehydrocholesterol, which is a precursor of vitamin D3.

Step #2: When we are exposed to UVB radiation, 7-dehydrocholesterol in the skin is converted to vitamin D3.

Step #3: Vitamin D3 must then be hydroxylated in the liver and the kidneys to become active. At this point, it can exert its endocrine effect. 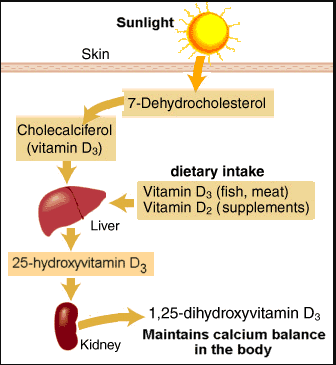 And sunscreen is similar. Applying sunscreen with an SPF of 15 will decrease the amount of vitamin D made in the body by about 99%. Hooray for basal cell carcinoma prevention. But bummer for vitamin D production.

Activated vitamin D has a serum half life of 2-3 weeks and its production in the skin is limited to 10,000-20,000 IU each day. Spending 20 minutes riding your bike outside in the summer sun produces 100 times more vitamin D than government agencies say you need. And once serum levels reach 150 nmol/L, any excess is inactivated. Thanks be to Mother Nature.

Vitamin D production via the sun can change throughout the year depending on where you live. If you live north of Atlanta, GA, you will make zero vitamin D from the sunlight between November and March. If you live below Atlanta, GA, you’ll be all right. It is possible to build some reserves of vitamin D, but these reserves won’t last longer than a few weeks.

Get yourself one of these bad boys — a portable Vitamin D meter!

Vitamin D is extremely rare in foods. It’s found in fish, cod liver oil, mushrooms, liver and eggs – but usually not in substantial amounts (except in cod liver oil).

Farmed varieties of fish contain very little vitamin D compared to the wild varieties. The only reason we even get vitamin D from foods like milk and cereal is because these foods are fortified with it — it doesn’t naturally occur.

Breast milk contains low amounts, with about 25 IU per liter.

Thus, getting enough vitamin D from whole foods is virtually impossible; it truly is the sunlight vitamin.

Fortification studies in adults show that consuming 100 – 1000 IU of vitamin D each day results in increased blood concentrations by 15 to 40 nmol/L. Other data with supplements indicate that for every 100 IU of vitamin D we ingest, we raise our blood levels by 2.5 nmol/L.

What should my blood levels be?

Now, while vitamin D is fun to talk about, what really matters is our circulating 25-hydroxyvitamin D [25(OH)D] concentration. It lets us know how much vitamin D has been produced in our body from sun, food and supplements. Its half-life is 15 days. 1,25 (OH)2D is not a good indicator of vitamin D status, as it has a short half life of only 15 hours and levels in the blood are regulated tightly by hormones and minerals. 1,25 (OH)2D only starts to decline when a severe deficiency of vitamin D is present.

The most advantageous serum concentrations of 25(OH)D seem to begin at 75 nmol/L, with the optimal levels being between 90 and 100 nmol/L. Most people will be unable to reach these levels with an intake between 200 and 600 IU of vitamin D.

What intake is optimal?

An intake of greater than or equal to about 1000 IU may be needed for most of the population. For postmenopausal women and older men, 25(OH)D concentrations of less than 30 to 80 nmol/L are associated with negative health outcomes.

For infants at northern latitudes, studies suggest that 200 IU vitamin D2 per day may not be enough to prevent vitamin D deficiency. A meta-analysis in adults suggested that an increased intake of vitamin D3 of 100 IU per day was associated with an increase in circulating concentration of 25(OH)D of 1 to 2 nmol/L. A recent study on women in Maine found that 800 IU of vitamin D per day was enough to reach and maintain adequate blood levels during the winter (for most of the women).

What levels of vitamin D intakes are associated with adverse effects?

Most studies do not report adverse effects with vitamin D supplementation. One study showed an increased risk of kidney stones with supplemental intakes of 400 IU vitamin D3 (along with 1000 mg calcium) each day in women aged 50 to 79 years.

Early symptoms are loss of appetite, nausea, and vomiting, followed by excessive thirst, weakness, nervousness, and high blood pressure. Because the calcium level is high, calcium may be deposited throughout the body, particularly in the kidneys, blood vessels, lungs, and heart. The kidneys may be permanently damaged and malfunction, resulting in kidney failure.

Vitamin D deficiency is a disease of neglect. It’s up to us to get in the sun and/or use a supplement as needed. And the data seem to be pointing towards reaching “optimal” levels, not just “normal” levels.

The total requirement for vitamin D (sun and food) is about 4000 IU/day to keep 25(OH)D levels above and/or around 100 nmol/L. Treating deficiency can require more. To normalize stores, adults require 3000-5000 IU per day for 6 to 12 weeks. As the potential for toxicity is present, work with your physician when beginning a supplementation regimen.

Full recommendations can be found in PN Version 3.0. They are very specific, so read them carefully. We will reprint them below:

Serum 25(OH)D is the best indicator of vitamin D status.

Using a multi-vitamin to get vitamin D can be a problem. By the time enough vitamin D is consumed, you will reach toxic levels for other vitamins/minerals.

Why are vitamin reviews triggered in the IOM-sponsored DRI Committees? Funding. Remember that we need to maintain a separation between funding decisions and the essential autonomy of scientific process.

Some data has indicated a link between Crohn’s disease and vitamin D deficiency.

Some research has demonstrated that vitamin D supplementation may be immunosuppressive.

A classic sign of vitamin D deficiency is isolated and generalized muscle and bone pain.

Medications can decrease activity of vitamin D in the body. These include anticonvulsants, bile acid sequestrants, GERD medications, corticosteroids and heparin. There is also some potential negative interactions with calcium channel blockers and diuretics, which can interfere with blood calcium levels.

People with dark skin may require 5-10 times the amount of sun exposure to produce adequate vitamin D, compared to someone with light skin pigmentation.

National Academy of Sciences. Beyond Discovery. Unraveling the Enigma of Vitamin D. Accessed 3/11/09. 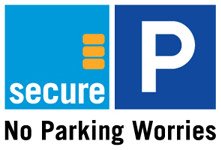 There are two car parking stations close by.

This website uses Google AdWords
This website uses the Google AdWords remarketing service to advertise on third party websites (including Google) to previous visitors to our site. It could mean that we advertise to previous visitors who haven’t completed a task on our site, for example using the contact form to make an enquiry. This could be in the form of an advertisement on the Google search results page, or a site in the Google Display Network. Third-party vendors, including Google, use cookies to serve ads based on someone’s past visits to the http://www.measureup.com.au/ website. Of course, any data collected will be used in accordance with our own privacy policy and Google’s privacy policy. 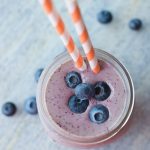 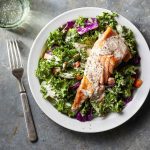